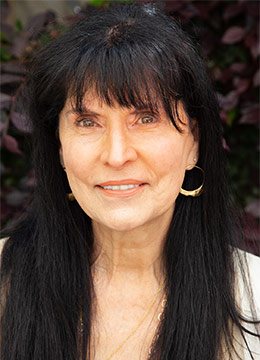 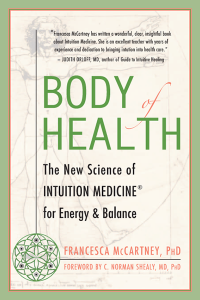 Published in 2005 by New World Library, Body of Health explores the science behind the mind/body connection. As a supplement to her books, Dr. McCartney also has an eight hours of audio teachings and meditations available.

“Body of Health is a marvelous antidote to the stress of modern life. With insights into energy blocks and clues to open them, here is your opportunity to study and practice the medicine of the twenty-first century.”

“Francesca McCartney has written a wonderful, clear, insightful book about Intuition Medicine®. She is an excellent teacher with years of experience and dedication to bringing intuition into health care. Don’t miss out on learning from her. Highly recommended.” 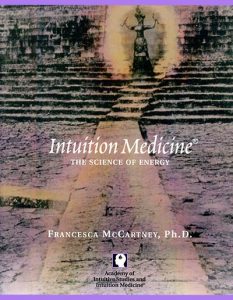 in January of 2001, Francesca published her debut book, Intuition Medicine: The Science of Energy. 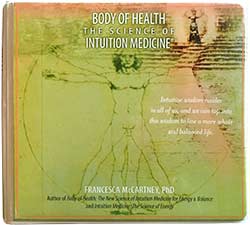 As a supplement to her books, Francesca compiled eight hours of teachings and guided meditations that are available as CDs or downloadable mp3s.  Read more

Since 1976, Dr. McCartney has worked in the field of intuition as a medical intuitive in an integrative health clinic, a spiritual counselor, author, and educator. In 1984, Francesca McCartney founded the Academy of Intuition Medicine® in Mill Valley, California USA.

Francesca synthesizes her decades of study in Eastern and Western spiritual and healing arts into an inclusive approach which respects both the inherent uniqueness of the individual and the commonalities that bind us all together. From her pastoral counseling and medical intuitive work with thousands of clients, Francesca developed the Intuition Medicine curriculum. Dr. McCartney is the inaugural recipient of a dual PhD in Intuition Medicine and Energy Medicine.

In 1966, Francesca received Laboratory Technician (hematology) certification from St. Joseph Mercy Hospital, Michigan. From 1968 to 1973, she studied Eastern mysticism—Divine Science of the Soul with Kirpal Singh. She also studied the Western mystical traditions of Theosophy and the Rosicrucian Society. She has been a licensed nondenominational minister since 1976.

Francesca received her Montessori teaching credential at the University of California, Santa Barbara in 1974. She directed three Montessori preschool programs in Northern California. In 2002 she received her doctorate degree with honors in Energy Medicine and Intuition Medicine® from Greenwich University.

In 1976, Francesca joined an alternative medicine clinic, the Academy of Eastern Medicine, in Walnut Creek, California where she was the meditation instructor and medical intuitive for seven years. Through her work there she became one of the first professional intuitives to practice an interdisciplinary modality combining Eastern and Western healing arts in a holistic system. In 1980, she was co-speaker with Dr. Alan Charles, MD on a talk entitled “The Effects of Energy and Color in Health and Behavior” at the International Academy of Preventive Medicine’s annual conference in Denver, Colorado, USA. During the conference, she led daily meditation workshops for the members. Her studies continued with training in Homeopathy, Radionics, Nutritional Therapy, Ayurvedic Medicine, Reiki, Qi Gong, and Huna Healing as well as the practices of Tai Chi and Yoga.

In 1984, the San Francisco Examiner newspaper interviewed Francesca for a story on predictions, and Gnosis magazine published a story about her intuitive healing work. In 1990 she was a founding member of the USA branch of the Kundalini Research Network and wrote a chapter on “Paranormal Experiences” for their international questionnaire. During this time, she was also a staff writer for Psychic Life magazine.

In 1999, Francesca’s class in Intuition Healing was taught on-site to the staff of fifteen complementary care physicians at California Pacific Medical Center’s (CPMC) Health & Healing Clinic in San Francisco, California. She participated as a “healer” in a research project conducted by Dr. Elisabeth Targ, research director at CPMC. Dr. Targ received a National Institute of Health grant to study the “Efficacy of Distant Healing by Nurses and Healers.” Francesca and Pamela Bradley, PhD, a research psychologist at the University of California at Berkeley, are creating a research project utilizing the Myers-Briggs Type Indicator (MBTI). They plan to use the MBTI assessment information in researching what they have observed as the varied types of “intuitive personalities.” Francesca is also currently conducting research into the efficacy of long-distance healing with Reiki Energy (for a detailed report on this study see “Effects of Reiki and Body Magnets in Distant Healings of the Chakra System.”

In 2002, the Institute of Noetic Sciences funded a seed grant and gave Francesca permission to conduct research in their Ganzfeld laboratory on the topic of Distance Healing. In July, Dr. McCartney presented her research paper “Distance Education: Utilizing Intentional Intuition in the Curriculum of a Distance Learning Model of Energy Medicine” at the L’Aquila, Italy IPSI Scientific Forum.

In 2003, Dr. McCartney had three articles published in Vision Magazine. They were: “Anima & Animus, Our Inner Female and Male Persona,” “The Gift of a Peaceful Death” and “Intuition – Your Sixth Sense.”

In December 2003, Dr. McCartney’s paper — “The Conscious Internet: An Empirical Study of the Transmission of Healing Energy via Email” — was published in Dynamical Psychology – An International, Interdisciplinary Journal of Complex Mental Processes.

In 2007, Dr. McCartney was invited to teach a five-day, hands-on training at Omega Institute of Holistic Studies in Rhinebeck, New York, where she returned to teach again in 2008 and 2009.

In 2011, Dr. McCartney was a featured speaker at the Society for Scientific Exploration Conference: SSE at the Forefront of Science, in Boulder, Colorado.

In 2013, Francesca was interviewed in the magazine Spirituality & Health on the topic of Energy Medicine. The title of the article is Reclaiming Energy Medicine: Making The Science of Energy a Twenty-First Century Respectable Health Care Choice.